A LIGHT AND FLUFFY DESSERT RECIPE

This dessert has a lot of different names that people call it. Orange Fluff, Orange Delight, Weight Watchers Dessert, or even 'The Orange Stuff.' It was something my mom made often when she was doing Weight Watchers. I don't know the point value anymore for this because they keep changing it all the time. I also don't actually adhere to a Weight Watchers diet so you'll want to do your own checking on the points if you are. However, you don't need to be on a diet to gobble this stuff up!

Do I have to use the cottage cheese?

Don't let the list of ingredients deter you. I know lots of folks gag at the thought of cottage cheese being in this. Most folks don't taste the cottage cheese as a separate ingredient. Unless they know it's in there, a lot of people can't really put their finger on what is different. But if you just absolutely cannot stand the thought of putting it in there - try substituting with plain yogurt.

Can I use sugar free options?

Yes absolutely! Any of the ingredients that you can purchase that are low sugar or sugar-free will work. In addition, you can get low fat cottage cheese (or yogurt if you're using that) as well!

Will this recipe work with other Jell-O flavors?

Absolutely! You can have fun playing around with this dessert and testing out different flavors for sure!

HOW TO MAKE ORANGE FLUFF:

In a bowl, combine cottage cheese with the orange Jell-O gelatin mix. Stir until well mixed.

Add in the well-drained can of mandarin oranges and the tub of Cool Whip. Stir.

Finally, stir in the marshmallows and pecans.

Cover and store in the refrigerator and allow to get nice and cool. If you were to eat it right away, it would taste grainy from the Jell-O. But give it at least a couple of hours and the flavors will really come together and blend nicely. This is definitely a dessert you can make the day before you need it.

CRAVING MORE RECIPES? GIVE THESE A TRY! 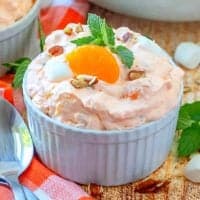