These ooey, gooey Tik Tok Cinnamon Rolls are a viral recipe on social media and you'll see why! It's a super easy but slightly different method for upgrading refrigerated cinnamon rolls!

I'm a huge fan of Tik Tok. Yes I admit it that it has sucked me in. There are so many fun things that you can learn from it and one of those things are these tasty Tik Tok Cinnamon Rolls. With minimal ingredients, these are nearly effortless with an outcome that you might not expect from canned cinnamon rolls. These cinnamon rolls will soon become one of your favorite recipes. They truly turn out just like those thick, gooey cinnamon rolls at the bakery!

Can I use any other type of cinnamon roll?

This recipe works best with Grand's and that is the original recipe. I have not tried it with any other brand of cinnamon rolls. If you can find a similar size large cinnamon roll like Grand's then it should be safe to use those.

Do I have to make the icing?

This is a nice jazzed up icing. If you do not want to make your own you can use the icing that comes with the cinnamon rolls themselves.

Is there anything I can add to these rolls?

For a slightly different texture and flavor you can add chopped pecans or walnuts to the brown sugar mixture before baking.

Can I use a different flavor of cinnamon roll?

Yes, you can use any flavor of the Grand's Cinnamon Rolls that you'd like. Sometimes you can find Blueberry or Strawberry flavors. Just make sure that you are using 2 (5 count) cans.

Do I have to cover my rolls while baking?

Yes, this is an important step. This helps the rolls bake evenly and not get too brown on top before they are done.

You can store these covered in the pan at room temperature where they will keep for 1-2 days or in the refrigerator for up to 3-5 days.

In a small bowl melt 4 tablespoons of butter and stir in the brown sugar and cinnamon.

Cover the pan with foil and place in the oven. Bake for 30 minutes. Remove the rolls from the oven and set aside while preparing the icing.

Spread the icing evenly over the top of the cinnamon rolls.

Note: You don't have to make the additional icing. You could just only using the icing from the canned cinnamon rolls. However, we find that icing just isn't enough so added this extra icing to the recipe. 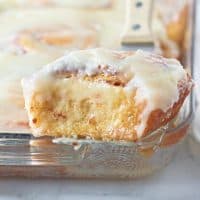