With super juicy marinated chicken and a fresh tzatziki sauce, these Chicken Gyros are the perfect light summertime meal to cool you down and fill you up!

These Chicken Gyros are a copycat recipe of a small local restaurant where I live. I absolutely love their gyros. The depth of flavor of the chicken is out of this world and it really all comes down to this marinade. Don't let the list of the ingredients steer you away. Most of it is for the marinade which really makes this recipe. Trust me it is worth it! The chicken gyros are such a great summertime recipe because it isn't a heavy meal but still fills you up!

What is a chicken gyro?

A chicken gyro is a pita wrap or bread that is stuffed with seasoned and cooked chicken along with various toppings including tzatziki sauce which is a creamy cucumber sauce.

What does "gyro" mean in Greek?

Yes! Pita bread and wraps are low in calories. Chicken breasts are low in fat but high in protein. Also, we're using Greek yogurt in this rather than sour cream which also cuts down on the fat. Also, you could make this into a Greek salad just by removing the wrap!

What type of meat is in gyros?

Traditionally gyros are made with lamb meat that has been roasted and basted on a large skewer. The meat rotates on this skewer as it cooks and is shaved off as needed to create a gyro.

Can I grill the chicken?

If you would rather not pan fry the chicken you can also grill it. This should take about 10-15 minutes and will also add great additional flavor. Chicken should always reach an internal temperature of 165F degrees to be considered fully cooked.

Do I have to use an English cucumber?

No, both English and garden cucumbers will work. We like the English because they are longer, produce less liquid and you can eat the skin since it's very tender. If you use a garden variety cucumber, you will need to remove the skin first and drain it very well to remove the excess water that these contain.

Can I use the Tzatziki Sauce for other things?

Yes, this works great as a dip for pita bread or chips, kebabs, fresh vegetables, or even a dressing.

HOW TO MAKE GREEK CHICKEN GYROS:

Pound the chicken flat, to about ¼ inch thickness.

Pour the marinade into a large ziploc bag. Place the chicken into the bag with the marinade and squish everything around to cover every bit of the chicken. Place this into the refrigerator for at least 2 hours.

While this is marinating, make the tzatziki sauce. Grate the cucumber using the large holes of a box grater. There is no need to peel the cucumber.

Place the grated cucumber into a cheese cloth or paper towels and squeeze to thoroughly drain all of the excess water from the cucumber.

Mix everything until combined. (Or you could pulse all of this together in a food processor.) Let this sit for at least 5 minutes to allow the flavors to blend.

When the chicken is finished marinating, remove it from the marinade (discard the marinade) and place it into a large skillet with a tablespoon of oil. Turn the heat to medium and cook the chicken for 3-4 minutes on one side (searing the chicken as it cooks), then flip and continue cooking until fully cooked through (internal temperature should be at least 165F degrees.)

Place the cooked chicken on a cutting board and allow it to rest for at least 5 minutes before cutting it into strips.

Prepare pita bread (or flatbread) by warming it. Then fill each pita with chicken, optional garnishes, and tzatziki sauce. Fold and serve! 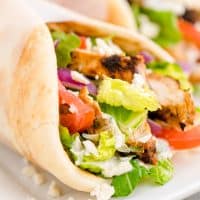