Cooked to perfection, this Brown Sugar Glazed ham is full of flavor! Brushed with a thick glaze, it comes out so tender and is the perfect holiday centerpiece!

When it comes to a holiday main dish, you absolutely cannot go wrong with this Brown Sugar Glazed Ham. With a delicious glaze that is baked to sticky perfection, there is no lack of flavor when it comes to this recipe! This ham will definitely be the star centerpiece to any of your holiday gatherings. Ham is my personal favorite holiday dish so I take it very seriously. Let me show you step-by-step how to make this beautifully delicious ham!

What size ham do I need?

Why do I add the glaze 3 times?

Adding the glaze in steps ensures that the ham gets layered in the flavor. If you add it all at once it will drip off off into the pan and not stick to the ham for the maximum flavor.

Can I use the pan drippings?

Yes! We absolutely love using the pan drippings as a sauce over the slices. We also cut all the meat off the bone, then thinly slice it. Then we add the slices back into the drippings in the pan and then serve ourselves from there. It keeps the ham moist while adding even more flavor to it.

Can I use another mustard?

Want a little twist? You can add whole grain mustard or spicy brown mustard for a different but equally tasty flavor!

How do I know when my ham is done?

The ham can be removed from the oven when a kitchen thermometer inserted into the thickest part (without touching bone) reaches 130 degrees F. The ham will then need to rest where it will continue to warm up until it reaches an internal temperature of 145 degrees F which is the recommended safe eating temperature according to food safety guidelines. So make sure you let your ham rest the allotted amount of time so it can reach the proper internal temperature.

What does it mean when the ham says "precooked"?

Most hams sold in US grocery stores are precooked, meaning that they have already been cooked and reheating is what you are technically doing to the ham. It is rare to find a raw ham at a regular grocery store. You can look at the label on your ham and it will usually say cured, smoked or baked or obviously precooked. They all mean the same thing, that reheating is what you are doing with the ham itself. This is why we go through the process of heating it using various recipes like this one and making sure that the internal temperature at the end is 145 degrees F. Precooked hams are a way to extend the shelf life of the ham itself. Regardless of what the label says, you will need to cook your ham again to make it warmed and safe to consume.

Can I use a spiral cut ham?

I have not tested this recipe using a spiral cut ham since I am not a fan. Although they are convenient, in my opinion, spiral cut hams tend to dry out too easily. I would stick to the bone-in ham for this recipe.

What if I don't have ground cloves?

If you do not have ground cloves, you can use ground cinnamon in its place or just leave it out completely.

What can I make with leftover ham?

Some of my personal favorites are: ham salad, Senate Bean and Ham Soup, Crock Pot Soup Beans and Ham, Creamy Ham Fettuccine, or perhaps a Ham and Potato Salad!

This can be stored in an airtight container in the refrigerator where it will keep for up to 5 days. You can also freeze this ham. Slice it all up and place in a freezer safe container and it will keep for up to 3 months. To defrost, remove to the refrigerator overnight until thawed. The best way to reheat leftovers is to heat them in the drippings on the stovetop or oven.

HOW TO MAKE A BROWN SUGAR GLAZED HAM:

Preheat the oven to 325°F. Take a large piece of foil and make it into a ring, place it in the middle of your roasting pan, and set aside.

Remove any fat from the ham if desired. Keeping some on helps keep the ham moist. Place the ham, cut side down onto the tin foil ring.

Score all over the outside of the ham into a diamond-shaped pattern.

Mix the chicken stock and ½ cup of pineapple juice together, and pour this into the roasting pan.

Brush ⅓ of the glaze all over the ham.

Cover the pan, not touching the ham, with a large piece of foil. You may need two overlapping pieces of foil to fit. Bake for an hour and a half to two hours until an internal temperature reaches 110°F.

Remove the foil and turn the oven up to 375°F. Brush half of the remaining glaze all over the ham. Bake an additional 20-30 minutes until the internal temperature reaches 130°F.

Turn the broiler on low. Brush the ham with the remaining glaze and broil until the glaze becomes bubbly and caramelizes on the outside of the ham. Make sure to keep an eye on it, so it doesn’t burn.

Remove from the oven and let the ham rest for 20 minutes before slicing (don't skip this step!) Serve with the drippings as a quick, delicious sauce over the ham slices. 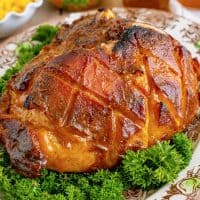