Fried Bologna, or Fried Baloney, is one of those old school sandwiches. Soft white bread, a schmear of mustard and crisp fried bologna!

I know the title of this says "Fried Bolgona Sandwich" but does anyone actually pronounce it as "Bologna?" We don't. It's baloney to us. So I guess I should have titled this Fried Baloneys since we don't really say the sandwich part either. It is understood that when you say you want some fried baloney that you are referring to a sandwich.

HOW TO MAKE A FRIED BOLONEY SANDWICH:

Cut two Pac-Man shaped triangle in a slice of bologna or make two slits on each side of the bologna (optional). Put a skillet over medium heat and throw a pat of butter in (about a tablespoon). If you need more butter as you're cooking these, just add a bit more in. Butter is gonna give you those nice crispy edges. When butter is melted, start frying up your bologna.

At this point, you want to fry it until it reaches your desired color. My husband likes his pretty dark. I like my edges to be crispy. Whatever your personal preference is. I also throw in those little shapes I cut out. They are so good crisped up! When it is finished, put it on your bread.

Also, if you prefer, you can toast your bread too. It gives it an extra little crunch. I like to put a little mustard on my bread.

My husband likes mayo only on his.

If it makes a funny little bowl shape, don't worry, you can just push it down a little when you stick your other piece of bread on top.

But it makes a handy little holder for a nice slice of tomato on top.

Serve with some chips and an ice cold glass of Coca Cola. And take a trip back to some simpler days.... 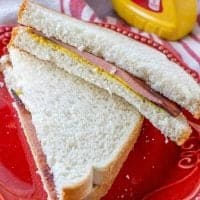